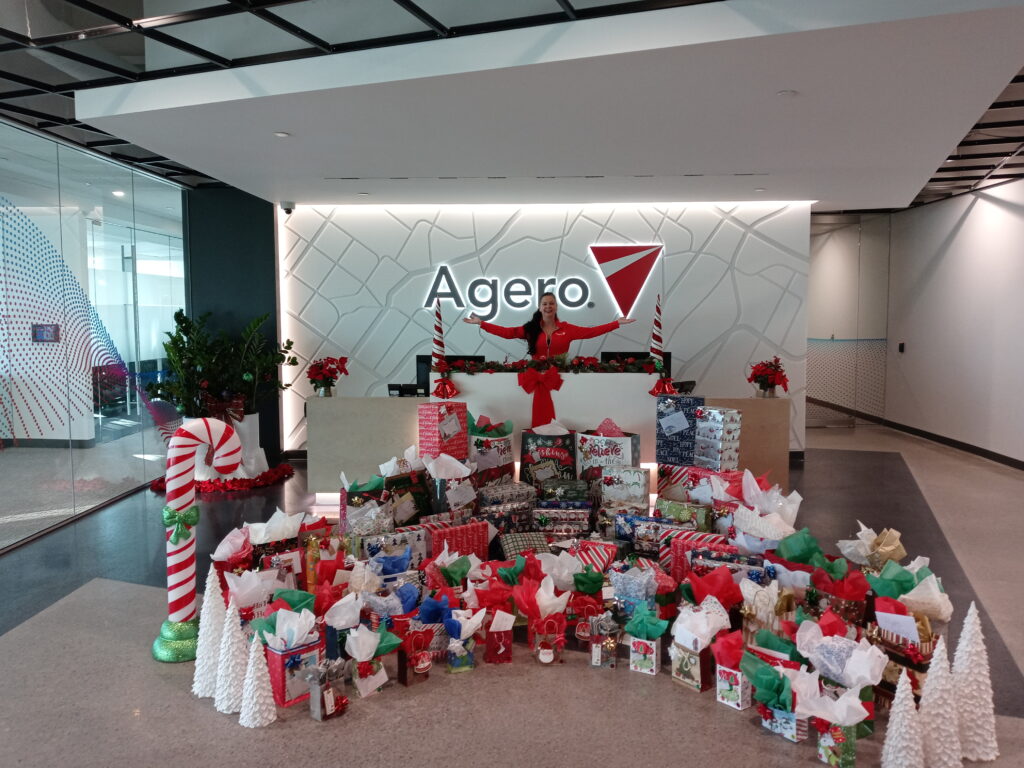 Mystic Valley Elder Services’ (MVES) consumers recently received an unexpected but cheerful visit during the holiday season from their care managers who delivered over 100 care gift bags full of clothing, linens, games, books and other items they had on their “wish list,” all donated by employees of Agero, a pioneer of the driver assistance industry based in Medford.

Agero has been contributing to their Giving Tree program since 2013 with more than 1,000 personal gifts shopped for and provided by employees to older adults in beautifully wrapped packages with items ranging in price from $20 to $200. The program operates by Agero staff letting MVES know how many gifts they will pledge to shop for each year. Case managers then nominate an older adult served by MVES who they feel is in need of items for personal use and enjoyment. Since the case managers know the older adults they serve so well, they create a “wish list” of items they know they would like and use. Each wish list is unique to that individual. Employees of Agero then “adopt” and shop for these older adults, collecting items on the list ultimately fulfilling their wishes.

Betsy Kantt, resident services coordinator at Mystic Valley Elder Services, shares her consumer’s reaction to the gift: “Artie’s Secret Santa gave him a $25 gift card to Market Basket and some chocolates.  What was more special, however, were the 12 greeting cards which he received.  Santa wrote one for each month.  Artie opened them all at once and hung them up in his apartment next to the birthday card I gave him in August.  He was thrilled to get them!  They were the only Christmas cards which he got.”

“We were so moved to see the multiple gifts so thoughtfully chosen to brighten the days of older adults in need,” said Jenny Vanasse, director of development at MVES.

“My consumer Daniel received gifts this year and was truly touched by the generosity of the staff at Agero,” says Kerry Kawalski, MVES resident services coordinator. “He loved everything that he received. With every gift that he opened his smile grew bigger. Daniel wanted me to make sure that the folks at Agero know how grateful he is for everything.”

Agero is not just giving to MVES during the holidays, the organization has sponsored the annual MVES Spring for Independence fundraiser for more than a decade. This coming spring, Agero will be a Lead Sponsor of this event at $20,000.  They have also donated more than 230 bags of nonperishable food and grocery gift cards since 2010.

Join us in our mission!

Subscribe to our e-newsletter The Beacon to stay up-to-date on MVES programs and opportunities.